it's time to tell the story of how i came to spend a day with my dear, new friend Gayle. 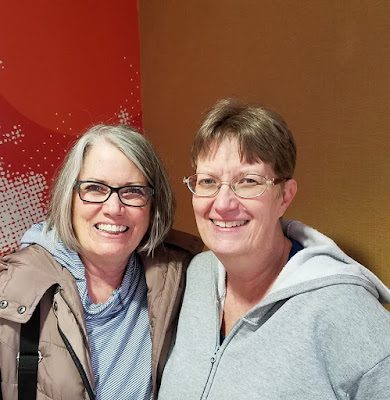 if you're in the world of junk journaling, you already know who Gayle Agostinelli is. if you've come from my writing blog, i need to give a brief introduction so this story will make sense. (and if you don't know what a junk journal is, here's a good definition on another blog.)

i hate to sound like a name-dropper, but in the junk journal world, people call Gayle the "Queen." she said she's been on YouTube for 3 years, and started doing junk journals about 2 1/2 years before that. she's up to 22,000 followers, and is one of the most informative, prolific, positive, and all-around fun YouTubers i've ever watched (and i've watched a lot of videos on many aspects of making a junk journal because i research things to death).

i didn't know who she was until i started looking into making junk journals (sometime in 2018), and when you look up videos on the subject, her name pops up a lot. i started watching, learned more about junk journals, and in July 2018, i joined a couple of junk journal Facebook groups.

fast forward to December of 2018. by then i'd joined a few more FB junk journal groups, and discovered that Gayle was in one of them. at the time, i was on pain meds while i recovered from a surgery, so my normal social filters weren't working. if they had been, i never would have looked up her Facebook profile and then used FB messenger to let her know that we both lived in Montana, and were about an hour and a half away from each other.

when my filters kicked in, i felt pretty weird about it, but Gayle was very sweet and said that once the weather was better, she wanted to get together to craft with me. i could hardly believe it, and really wasn't sure it would ever happen.

then one day it happened.

in April 2019, my husband had a meeting scheduled in the city where Gayle lives. i had an abnormally spontaneous idea that maybe i could go with him and spend some time with her while he was in his meeting. a week before he was supposed to go, i sent her another message (still feeling a little awkward) and she was thrilled with the idea that we would get to meet. i was jittery the whole week, and even more jittery on the morning she was going to pick me up from our hotel.

as soon as i met her, the jitters went away.

we said our hellos and she drove me to her house. we spent spent a couple of hours in her craft room (talking instead of crafting), and at the end, i did a quick video tour of her amazing space. After lunch, we went to an antique mall, where she gave me some pointers on how much to pay for certain items that can be used in a junk journal.

at one point, she found a book she really wanted, but wasn't sure she should buy because of the price. i told her to go for it. i'm now her official antique shopping enabler.

while i was trying to pay for my "finds" at the register, she offered to give me part of a set of books she'd already paid for. one of the books i wanted was also one that she wanted, so she suggested we do "rock, paper, scissors" to decide on who would get it.

it took a few minutes to get ourselves under control (???) and then we went for one more "rock, paper, scissors." she won and said, "you never know what you'll get on a blind date." that set us to laughing all over again.

it was very hard to say goodbye, but i know there will be many more days of antique store shopping and laughter with my new (old) friend. and she just lives "down the road" by Montana standards.

both Gayle and i are very thankful for those pain meds.

here is the tour of Gayle's craftroom.

here is Gayle's version of our day, along with some things i gave her, and her antique store haul.

here are the things i got from the antique store, and from Gayle

and here is a flip-thru of the altered book she made from one of the books she won in our rock, paper, scissors battle
Labels: friends, Gayle Agostinelli, junk journals
Email ThisBlogThis!Share to TwitterShare to FacebookShare to Pinterest

if you're a facebook friend and want to leave a comment, but prefer to not use the comment form here, or you just don't want to fiddle around with using google, please feel free to send me a private FB message.

welcome to my blog

i'm Michelle Gregory. i love my husband, my 3 kids, my 1 cat, 2 dogs, and 2 horses. i'm a native Arizona girl, but i'm learning to appreciate life in Montana. i write, make junk journals, watch a lot of Hallmark movies, and spend way too much time on Facebook and Youtube. welcome to my world.

thank you for following

stuff i talk about